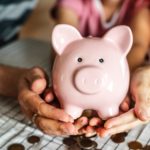 Many couples don’t realize that pension and retirement benefits are also assets that are subject to being distributed upon divorce.  Retirement assets include the monthly pension upon a spouse’s retirement, accumulation in individual retirement accounts (IRAs), 401k’s, annuities and amounts put away in various other types of profit-sharing plans. However, the party who earned the pension, or retirement benefit during the marriage, does not necessarily pay the other spouse one-half of the benefit received at retirement.  For example, if husband works at ABC Company for 30 years, 15 of which were while the parties were married, the wife will not receive 50% of his monthly amount when he retires.  Rather, the wife will receive an amount, based on an actuarial calculation, of the number of years she was married vs. the total number of years her husband stayed in the plan until retirement.  Thus, instead of wife receiving an outright one-half of the husband’s monthly amount when he retires, she will receive in the area of one-half of one-half the amount because she was only married to the husband for half of the thirty (30) year period he worked.

Most retirement plans will require what is known as a “Qualified Domestic Relations Order” (QDRO), which is an Order from the Court that tells the Plan Administrator to divide the benefits in accordance with the parties’ Matrimonial Settlement Agreement (MSA).